An article in the Indian Express and Deccan Herald had covered Shycocan device in a negative light. This response explains the key points raised by the article.

“There is no scientific evidence for any of the things that they have claimed. Many of the points they have stated are absolutely wrong in terms of physics. They say they fill the air with electrons. This is a very childish and physically incorrect concept because physically electrons cannot survive in air and they get absorbed by other atoms and molecules quickly. In our lab when we do experiments with electrons we have to do it in vacuum,” said Umesh Kadhane, professor and head of the physics department, at the Indian Institute of Space Science and Technology (IIST) in Thiruvananthapuram. 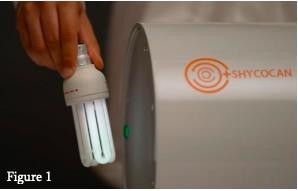 A part of the text of the article “they get absorbed by other atoms and molecules quickly” is true. However, it needs to be understood in the context of the device producing trillions of photons per second, hence, even though the electrons are produced only for an instant they protect at all times due to this continuous operation.

This phenomenon is based on the following scientific principles as below.

“It is being marketed already. Actually it is a dangerous thing to do unless it is validated because people will get a false sense of security and people will become careless and think that this device will protect them. Their claim that it will only kill coronavirus is absolutely bogus because electrons do not distinguish between viruses and bacteria, and they simply attack surfaces. There are many flaws in their explanation,” said Dr Kadhane, who works in the specific area of atomic and molecular physics.

According to professor Arindam Ghosh from the physics department at the Indian Institute of Science (IISC) in Bengaluru, the claims of the Shycocan device being a coronavirus killer is unsubstantiated by any scientific document.

“The claim is that if you fire a lot of electrons, it affects and deactivates the S protein of the coronavirus. I do not know of any scientific document which proves this. To my understanding, there is no data available even outside the publication domain which proves it,” said Dr Ghosh. “I do not understand what charged photons are or even how some weird electrons seek only the coronavirus to kill leaving everything else unaffected.

The device conforms to CE Class I device specifications and is being sold in the US under the “Enforcement Discretion Guidance” during the COVID-19 Pandemic/ Public Health Emergency. It already conforms to regulatory requirement of US, Europe, India, UAE, Malaysia, Australia New Zealand, South Africa and host of other countries. The tests for the safety of the device has been done by UL laboratories (test report references as per figure 2 below). The efficacy 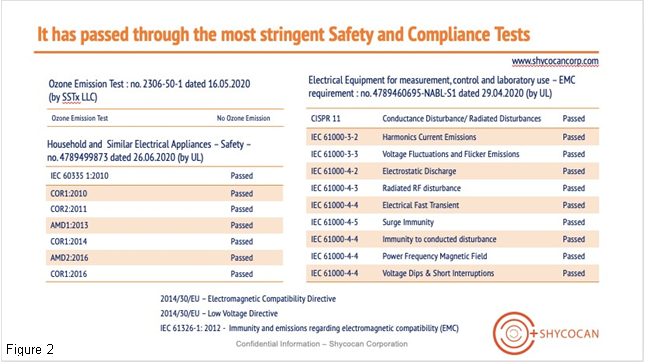 of the virology and toxicology has been done by a globally accredited laboratories which confirms that 99.9% of the virus is disabled in every test while not being harmful to humans and animals (test report details as per figure 3). It’s efficacy is proven for various scenarios (i) both for Coronavirus and Influenza virus, (ii) efficacy in exposure times as low as 60 seconds,

(iii) both for surface & air-borne viruses (iv) distance of area of 1000 square feet (v) safety to human cells . and animal cells with exposure times of 12 hours and 24 hours respectively. 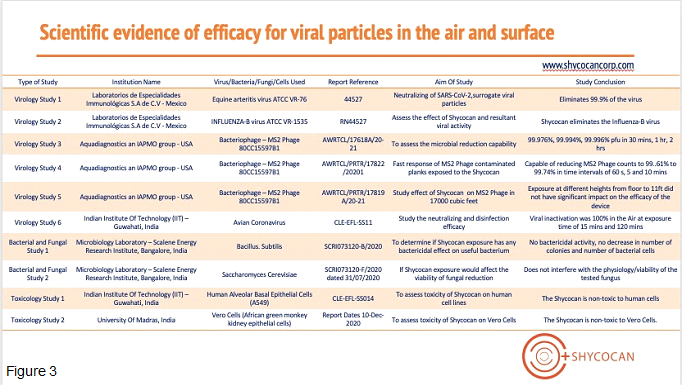 While the electrons do not distinguish between virus or bacteria but they get attracted by the positive charge on the capsid (shell) enclosing the Coronavirus due to the opposite polarity. Coronavirus is a Positive-Sense virus, whose S-Protein attaches to the human cell through the ACE2 receptors due to the opposite charge. All human cells have a negative potential (about 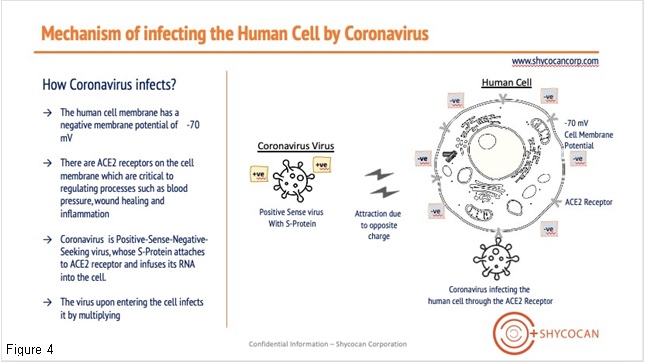 -40mV to -70mV). The virus infuses its RNA into the cells and starts to multiply, infecting the body. This is explained in figure 4.

Shycocan continuously emits photons that form an electron cloud effect in an indoor space. The negative charged electrons attach to the virus and neutralize its positive charge thereby disabling it. Hence, the device works on positively charged capsid viruses, namely, the Coronavirus & the Influenza virus families; and not on bacteria and fungi. Hence, Shycocan is equally effective against all types and variants of Coronavirus and Influenza virus families due to the positive charge of their shell. The mechanism of working is as shown in Figure 5.

Further details on the positive nature of the virus may be found in the following articles. https://www.ncbi.nlm.nih.gov/pmc/articles/PMC7374936/

“They claim to be using UV light. UV light has a maximum energy of a photon of light of, let us say, two or five electron volts. How do you shine five electron volts on something and get 1.5 million volt electrons? This beats me. Unless you show me the data and how it works I cannot believe you,” said Dr Bhattacharya, the chair for TIFR public outreach.

There is no UV used nor UV produced by the device. UV light may cause blindness and skin cancer. It only produces Photons of a specialised frequency. Hence, the above assertions are not in context of the actual technology used in the device.

The article does not provide any scientific evidence against the device. However, it does clearly show that the scientific principles and the mechanism of working has not been understood by the individuals quoted in the article. They did not seek any information from the company or the inventor about the science behind the device nor was any devices asked for testing, prior to making these assertions.

This is clearly not a scientific article. These are some assertions made in lay press without any scientific basis and should be treated as us.

The product already conforms to regulatory requirements of US, Europe, India, Australia, New Zealand, UAE, Malaysia and host of other countries.

Mankind is facing its worst crisis ever. We are working towards helping bring businesses and life back to normal. It is an important for you to seek facts and decide for yourself.

For any further details on the technology

The Shycocan is a CE class - 1 device and it conforms to the regulatory requirements of US, Europe (UK, France, Germany, Spain, Italy, Netherlands, Belgium, etc.) Australia. New Zealand, Singapore, Malaysia, UAE, Qatar, Botswana, India and many other countries.